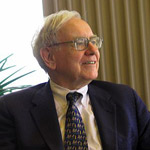 Technophobe Warren Buffett finally joined Twitter on Thursday, announcing “Warren is in the house” with his new account, “@WarrenBuffett,” and within just 45 minutes picked up more than 45,000 followers. (For those who aren’t as good with numbers as Buffett, that’s more about 1,000 followers per minute.) After 5 hours, he already has 174,633 followers.  Buffett’s account was soon verified by Twitter, and a few hours later the 82-year-old billionaire also tweeted about his “new essay on why women are key to America’s prosperity”. His initial tweet has amassed 25,399 retweets, and his second 1,624 (so far).  Obviously, people are thrilled to see Buffett on Twitter – but perhaps no one happier than fellow philanthropist Bill Gates, who welcomed Buffett to Twitter with this tweet: “Welcome to Twitter @WarrenBuffett. First ever Twitter bridge tourney starts now. I bid 3 Hearts. http://ow.ly/i/21tlH”.