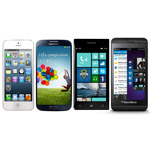 There’s no question that we spend a lot of time staring at our phones, but just how much? Well, on average, it’s about an hour, according to a new study from Experian. Interestingly, nearly half that time is spent talking and texting, with email, social networking and Web browsing each outpacing playing games. Watching video, meanwhile, accounted for only 1 percent of total time spent on smartphones. (That’s a bit skewed, as 98 percent of people surveyed didn’t watch video at all, meaning that those who did watch video spent considerably more time doing so.) Also, not all smartphones are used equally. The study found that iPhone owners spend considerably more time using their phones — about an hour and 15 minutes, compared with 49 minutes for the typical Android phone owner. They also split that time somewhat differently, with Android phone users spending more time talking and Web surfing, and iPhone owners doing more texting, emailing and taking pictures.