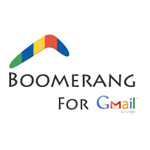 Baydin, the company behind the Boomerang for Gmail service on the Web, has released its first native app on Wednesday – and it’s only available on Android. The service known as Boomerang for Gmail has been helping people organize and keep track of the most important mail in their inbox for a while now, and while the site plays nicely on all the major mobile operating systems the folks behind the service thought it high-time that it had its first own native app. “Over the past few years, it’s no surprise to anyone that the amount of our email we handle on mobile devices has increased dramatically.  We have wanted a first-rate mobile experience to complement our desktop offering for quite some time […] we now have the resources and bandwidth to make a fully featured and well thought out mobile client,” Aye Moah, Chief of Product at Baydin, told The Next Web.