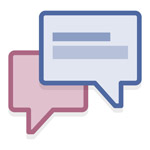 Facebook has built a new feature codenamed “Host Chat” that lets people set up chat rooms their friends can join without an invitation, a source familiar with the feature tells us. I’ve contacted Facebook and it confirms it has begun testing this feature in the wild. Reminiscent of the old AOL chat rooms, it could get Facebook users to meet friends of friends and spend more time on the site. Facebook verified with me that it’s testing the feature, but wouldn’t comment on details beyond saying “we do test things from time to time with a small percentage of users.” These tests can be a small as a fraction of a percent of all users, and are sometimes isolated to particular countries, so it’s unlikely you’ll see this in your own Facebook unless the feature does well and receives a wider roll out. The leak comes as Facebook is fighting a war for messaging.