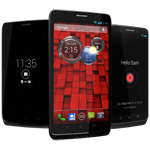 After sending an invite to press teasing ”the next generation” of its “most popular family of devices,” Verizon has announced the launch of three new Droid devices made by Motorola: the $199 Droid Ultra, the $299 Droid Maxx, and the $99 Droid Mini. All three are available for pre-order now, and will ship on August 20th. According to The Verge, Motorola says the Droid Ultra “is is all about thin,” while the Maxx “is about battery.” The Droid Mini is apparently ”compact without compromise.” These devices will serve as a replacement to last year’s line of RAZR products. All three phones reportedly have a 24 percent faster CPU, a 100 percent faster GPU, twice the RAM, Kevlar backing, and ”touchless control,” a feature that we heard would arrive on the upcoming Moto X. The Droid Ultra features a 5-inch “HD” 1080p display, 2,130 mAH battery, 7.2 MM-thin body, 10-megapixel camera capable of 1080p video and a f2.4 lens.