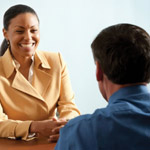 In June, the job market said good-bye to one million people.

Even though we added 195,000 people to the payroll that month, the Bureau of Labor Statistics reports a million others quit looking for work. The main reason? Frustration and discouragement.

On the Web, gloom and doom run rampant. One girl’s rant on Reddit spurred an huge conversation on why twentysomethings can’t get hired. If you have a job and want to feel good about your life, read a few Unemployment Stories on Gawker. Like a punch to the gut of our sagging economy.

Every part of the hiring process counts, but a face-to-face interview is the best opportunity to dazzle the boss and land a coveted offer.

To maximize those precious moments, here are the four types of interview questions every Millennial should ask an employer.

Each one demonstrates critical thinking and declares: I’m in it to win it.

Scenario: you’re interviewing to do marketing/communications for a grocery chain.

People love to talk about themselves. Period. If you come prepared with a question about the boss’s career (thanks to LinkedIn digging or a Web site bio), he will perk up, brag on himself and find you impressive — even though you only asked a question and listened.

Sample interview question: “I noticed that you started your career in marketing for Ringling Brothers circus. What was that experience like?”

Every company has a Web site. Read it before the interview. Check out past and current projects, staff bios and get a general sense of the office culture. Then, drop something like this to prove you did your homework.

Sample interview question: “I read several of your recent press releases and saw you’re making a push to carry more gluten-free products. How big is the demand right now for gluten-free foods?”

The bio question, the company question… both solid. Now, turn your focus to the industry, in general. Read news about the grocery biz and put the company in context with the latest headlines. That’s next-level stuff, which prompts a ‘wow’ from the boss.

Sample interview question:“I see Kroger just bought Harris Teeter. That seems like a major shake-up in the grocery industry. What does the Kroger takeover say to you?”

With the ‘wow’ question, you took the interview from an uncomfortable boss-applicant arrangement to a conversation among peers. Now, plant a seed in the boss’s brain with a cool marketing idea. Make him feel like he needs you on the communications team right now.

Sample interview question: “I really like the way your store offers online deals based on my previous purchases. For me, a twentysomething, it’s a smart strategy. Wouldn’t it be cool to do a targeted campaign that reaches young adults where they spend time online?”

If we could, we would all quit the job market.

No one wants to look forever.

Try these four types of interview questions and give yourself the best chance at landing the job.

(This content was originally posted at News To Live By.)