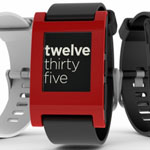 Although the Pebble smartwatch was the most successful Kickstarter project ever, raising $10.2 million, many mainstream consumers haven’t heard of it. That’s about to change thanks to an exclusive deal to put the Pebble on Best Buy retail shelves. The wireless wearable in a Jet Black color can be had now for $149.99 at Best Buy’s online store and in Best Buy locations starting July 7. If you’re not familiar with Pebble, it’s a smartwatch that works with iPhones and select Android devices, wirelessly connecting to them via Bluetooth. Once paired with your phone, Pebble receives text messages, emails, Facebook status updates and incoming calls so you can decide to respond or take action on your phone. The watch has a built-in backlight and also functions as a remote control for music and other media playing on the phone.