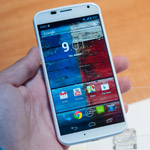 The first Motorola phone with Google design input is here and according to Eric Schmidt, Google’s executive chairman, the Moto X handset offers “the best of Android.” I spent time with Google and Motorola representatives on Thursday morning to see the phone and understand what makes it different. I walked away with a very distinct impression that reinforces my earlier thought: Moto X is an Android phone for the masses. To understand that theme, you have know how the Moto X was designed. Motorola says it’s the direct result of numerous studies it did on the average smartphone user. First, the company determined the most appealing handset volume consumers prefer to carry. From there, Motorola decided on the largest screen it could fit in that volume. And lastly, it rounded the back of the Moto X because palms aren’t flat.