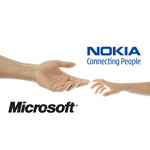 Microsoft announced late Monday that it is buying the majority of Nokia’s cellphone unit for 3.79 billion euros ($5 billion), and spending another 1.65 billion euros ($2.18 billion) to license Nokia’s patent portfolio, for a total of 5.44 billion euros ($7.17 billion). Once the deal is done, a number of Nokia executives will join Microsoft, including Stephen Elop, a former Microsoft executive who is seen as among the top contenders to replace outgoing CEO Steve Ballmer. Also set to join Microsoft are Jo Harlow, Juha Putkiranta, Timo Toikkanen and Chris Weber. For now, Elop is stepping aside as Nokia CEO to become executive VP of devices and services. Nokia Chairman Risto Siilasmaa will serve as interim CEO. “For Nokia, this is an important moment of reinvention, and from a position of financial strength, we can build our next chapter,” said Siilasmaa.