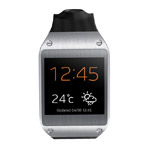 Samsung has formally unveiled the Galaxy Gear smartwatch, which connects to an Android smartphone via Bluetooth, following a number of leaks running up to the event. At around the size of a regular watch, it has a 1.63-inch AMOLED touchscreen display, 1.9-megapixel ‘Memographer’ camera on the side of the device for capturing snaps with a tap and Bluetooth on board. As you might expect of a smartwatch, it provides much of the functionality of an Android device without needing to actually touch your phone. Core to the experience is the voice control, which will allow you to carry out all the usual functions like switching music on, making or receiving calls and sending messages, as well as operating apps. The Galaxy Gear has also been pre-loaded with Samsung specific apps and is targeting health and fitness fans with the inclusion of support for others like RunKeeper and MyFitnessPal.