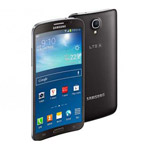 Samsung has taken the wrapper off its rumored smartphone with a curved OLED display. The Galaxy Round, which will launch on SK Telecom in South Korea, has a 5.7-inch 1080p screen the same size as seen on the company’s Galaxy Note 3, but there’s a difference — it curves on the vertical axis in a similar fashion to some of Samsung’s OLED TVs. The potential benefit of this screen technology isn’t quite clear yet, but Samsung is touting a new feature called “Round Interaction,” which allows you to look at information such as missed calls, battery life, and the date and time when you tilt it on a flat surface with the screen off. Samsung also claims that switching between home screens will feel like one continuous transition, and has worked on new tilt- and tap-based interactions for the music and photos apps.

PreviousMozilla Upgrades Firefox OS to 1.1, Prepares to Launch in More Markets NextHow to Get Unlimited Talk, Text and Data for $30 a Month on iPhone