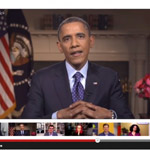 Hangouts, which has so far only successfully unified Google+ Messenger and Google Talk, leaving Messaging and Voice to co-exist, is finally getting SMS and MMS integration. According to sources familiar with the matter, the upcoming Hangouts version 1.3 has these features enabled and, furthermore, also allows sharing of videos via the Hangouts protocol. Messages sent via SMS will show “via SMS” next to the timestamp so that you can always figure out the protocol used for each message delivery. You can request delivery reports for sent SMSes – a feature that is part of the SMS protocol that some of you may be using regularly (though if you are, please don’t text me). MMS picture messaging is supported as well, though I can’t confirm sending of video via MMS at this time. There is a settings menu for wireless alerts as well as a toggle for auto-retrieving messages while roaming.