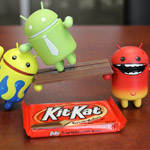 Android 4.4 Kitkat could place added emphasis on connected televisions and not simply smartphones, says Korea’s ETNews. The publication cited sources familiar with the situation, who said that the next version of Android will improve the way that TVs and Android-powered devices work together. The report didn’t offer any specifics, but it did mention an enhanced user interface. Android 4.4 is shaping up to be a minor update with few overall changes to the platform. Based on the chatter thus far, the next build will mostly center around fine-tuning the UI as opposed to introducing new functionality. Still, Google could very well squeeze some added capabilities into KitKat that we just haven’t heard about yet. Screenshots leaked a few weeks back indicate that Android 4.4 could feature the ability to mirror your Android screen to a television set via the Miracast protocol.