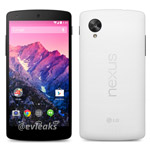 Ah, the not-so-mysterious Nexus 5. We’ve seen leaked photos, a leaked video and product shots accidentally published to Google Play, so it’s fair to say we know Google’s new smartphone is coming soon, but the wait could be over by November 1 — according to the latest leak.Ever-prolific leak meister @evleaks tweeted a photo of a Nexus 5 with a white back panel and a reference to November 1. It’s unclear if that might be the announcement date, or the retail launch of the device — which has also been rumored for a October 31 press conference. A white version of the Nexus 4 wasn’t forthcoming until some seven months after the black one went on sale, but @Evleaks implies a white Nexus 5 will be available at launch.