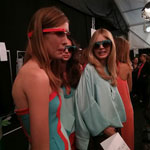 With the Galaxy Gear and new Note out of the gate, a rumor from Eldar Murtizan has it that Samsung is now developing a competitor to Google Glass. Glass is Google’s yet-to-be-released take at wearable computing: an accessory that pushes your content into the view of your eye. There’s no actual detail on what Samsung’s take on a face-worn computer would be, but it apparently will be called “Gear Glass.” The “Gear” in the name is perhaps unsurprising given the name of its recently launched watch, but the “Glass” part will surely put the company in some trouble with Google. Of course, none of this is confirmed to be true, but given Samsung’s historical approach to developing several different product lines, it could happen.

Read the full story at 9to5 Google.

PreviousSamsung May Unveil a Smartphone With Curved Screen This Week NextAnalyst: iPhone 6 Will Feature a 4.8-Inch Screen