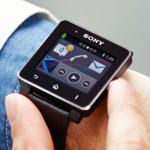 Technology giants such as Samsung, Microsoft, Google and maybe even Apple are just now realizing there may be a future in wearables, but other tech companies have already been dabbling in smartwatches for some time now. Sony is one example, having recently released its second-generation “SmartWatch 2″ in Europe and Asia, and Sony on Tuesday announced that its new wrist-worn computer is now available in the U.S. The SmartWatch 2 is the first smartwatch on the planet to include water resistance, dust resistance and NFC, and it also features a solid build thanks to its aluminum case and silicon strap. The device works with most moderns smartphones — unlike Samsung’s Galaxy Gear, which only works with one for the time being — and it costs $199.95 from Sony’s online store.