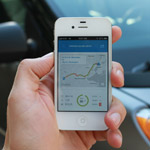 I don’t know about you, but I’m digging the whole “quantified self” trend. I use Sleep Cycle, a great little iPhone app to find out exactly how well I sleep each night; I just pre-ordered the new Fitbit Force; and I’ve come dangerously close to dropping my money on the cheeky Spreadsheets app–but that’s where I’m drawing the line. And so, it’s exciting to see Dash, a technology that promises to be the “Fitbit for cars,” raising $1.2 million on AngelList. Dash promises to turn any car built after 1996 into a smart car by connecting it via Wi-Fi or Bluetooth to your smartphone. While Dash doesn’t make any hardware itself, third-party manufacturers can include the Dash algorithm onto low-cost devices, which consumers can plug in to the government-mandated open OBD (onboard diagnostics) port on their cars.