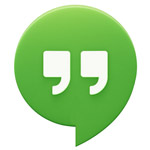 As expected, Google on Thursday released its much-anticipated Hangouts 2.0 update for Android. You can download the new version now directly from Google Play. The new version includes SMS support (as well as MMS support on Android 4.0 and up), animated GIFs, and one-tap location sharing. The last option is as simple as tapping the new pin icon in the bottom right-hand corner of the app; Hangouts will then pull in your immediate position and post it within the conversation stream as a Google Maps thumbnail. SMS/MMS support means you can use Hangouts as your default app both for traditional texting and picture messaging in addition to Web-based instant messaging. This effectively replaces the stock SMS app, and in fact on KitKat, you have the option to set a default SMS app. In addition, animated GIFs now also play inline.