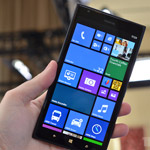 Nokia’s Lumia 1520 looks set for a release on AT&T next week. The Microsoft Store is now accepting pre-orders with a release date of November 15th for $199 on contract. Following similar deals for the Lumia 900, 920, and 1020, AT&T is the exclusive carrier for Nokia’s latest Lumia 1520 Windows Phone. The 6-inch handset is available in black, white, yellow, and red at AT&T, with off-contract pricing set at $549. While the Lumia 1520 is launching on AT&T shortly, there’s no word on full international availability just yet. AT&T’s variant is unique as the built-in Qi wireless charging has been removed in favor of optional shell accessories that make use of the rival PMA standard. International versions will have wireless charging built into the handset. AT&T’s Lumia 1520 appears to only be available with 16GB of storage, but the device does have a microSD slot to expand storage.