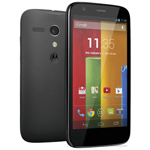 Motorola Mobility apparently couldn’t wait for its low-cost Moto G to hit the States. The Moto G went on sale in the US on Tuesday, available only in the GSM variant and unlocked on Motorola.com for $179 without a contract. The surprise launch comes well ahead of the company’s previously planned target of getting the Moto G out in the US by January. Motorola CEO Dennis Woodside told CNET that early demand for the phone has been strong overseas. The company was able to ramp up the manufacturing process faster than anticipated, and it was able to get the Web site up faster, allowing for the early release of the phone. By launching now, Motorola also takes advantage of the holiday shopping season. That doesn’t take away from its plans for the first quarter. Motorola’s carrier and retail partners will launch the Moto G in January, just in time to take advantage of the traditionally strong prepaid market early in the year.