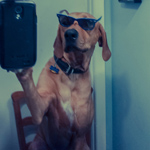 Last year Oxford University Press split its word of the year honors between the US and the UK, but for 2013 there’s one word to rule them all — and it is “selfie.” The term beat out contenders like twerk, bitcoin, and binge-watch, due largely to its remarkable uptick in usage. According to research conducted by Oxford Dictionaries editors, the use of selfie has increased an incredible 17,000 percent since the same time last year. While the term has certainly come into the mainstream over the past 12 months, its origins actually go much further back. The Oxford University Press discovered the term used in an Australian forum posting in 2002, where it was used to describe a photo the poster took of themselves after a drunken fall; the hashtag #selfie surfaced on Flickr two years later.

PreviousMcDonald's to Launch Free WiFi in Over 1,400 Chinese Locations NextDropbox Seeking $250 Million in Funding Ahead of $8 Billion Valuation