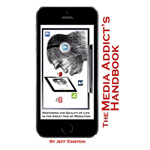 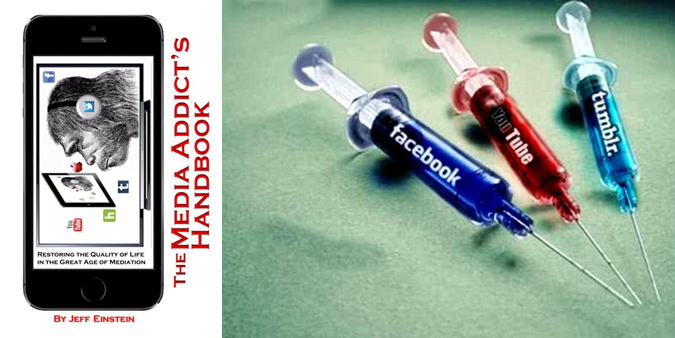 Digital media pioneer Jeff Einstein started writing about media as addiction in 2004. Back then, he observed how our fealties and addictions to the media and digital devices in our lives had already begun to turn against us, like an addiction to any other narcotic. Of course, back then almost everyone thought he was crazy. Today, however, media as addiction is a common topic of discussion on just about every TV and radio talk show – from Bill Moyers to The View. Alarmingly, what Jeff predicted ten years ago has unfolded just as he predicted. So when I heard about his new title, The Media Addict’s Handbook, I called him on the phone to talk about it.

JAFFER: What distinguishes The Media Addict’s Handbook and your views in general from those of other thinkers and writers, who in the past year or two have started to sound the alarm about our relationships with media and digital technology? I’m talking about folks like Nicholas Carr, Andrew Keen, Jaron Lanier, Sheri Turkle, Heidi Boghosian and Nicholas Taleb.

JEFF: Well, with the possible exception of Nicholas Taleb, the others you mentioned have pretty much circumscribed their views and thoughts to our relationships with the digital technologies in our lives. My thinking, however, is much more systemic. To me, the technologies themselves are of far less concern than the threat posed by our super-addiction to them. To me, the medium is the real message, and the real medium is no longer the technology. The real medium is a super-addiction that now sits as moderator over all our most critical personal and societal debates. The specific technologies and media merely represent our individual drugs of choice.

JAFFER: So you view social media and short-format videos and video games and email and texting and laptops and smartphones and HDTVs and game consoles as individual drugs, component parts of a much larger default addiction.

JAFFER: But why has it taken so long for the rest of society to wake up to your media-as-addiction message?

JEFF: Because everyone else around us is addicted to all things media and all things digital also, and we simply can’t see the forest for the trees. Because our addictions are fun and entertaining and comforting at first. Because we’re wired to pursue pleasure and avoid pain. And because we have an innate tendency to deny the addictive power of our narcotics while we exaggerate our ability to resist them. The quid pro quo with all addiction is essentially the same now as it was five thousand years ago in the cradle of civilization: reliable diversion and escape and succor in exchange for our time and money and freedom. The drugs, however, are a lot more powerful and a lot more plentiful.

JAFFER: Really? You think the drugs today are more addictive?

JEFF: Oh, without a doubt. HDTV is history’s most perfect narcotic. It’s not for nothing that every digital device sold on the planet comes with an LCD.

JAFFER: In The Media Addict’s Handbook you write that our systems have started to turn against us. What do you mean by that?

JEFF: All systems pushed to extreme begin to exert an opposite effect. They begin to operate in reverse.

JEFF: Yes. Addiction is a perfect example of what happens when a system is pushed to extreme. At first, we get pleasure and succor from our drugs of choice. Sometimes, however, they begin to turn again us. And sometimes they take over our lives and enslave us — exactly what’s happened to us on a massive scale in our individual and societal relationships with all things media and all things digital.

JAFFER: Can you give me some examples?

JAFFER: How does that translate into our day-to-day work lives as media and marketing professionals?

JAFFER: What can we do about it? We all use the same basic digital tools, and we can’t just unplug.

JEFF: No, we can’t just unplug. The first thing we need to do is understand that this is less about the media per se and our digital technologies and more about our addictions to them. Only once we understand and accept our addiction to all things media and all things digital as the default condition, the rule rather than the exception, can we begin to deal with the real problem. Our addiction tells us that we can never have enough technology or data or news or entertainment, and the essential message of all addiction is always the same, regardless of the drug: “Eat all you want; we’ll make more.” Addiction is always about excess.

JAFFER: So what do you suggest?

JEFF: I suggest less. I suggest moderation. I suggest that we learn to slow down, learn to let go of failure and learn to embark on a path of deliberate simplicity. Restoring quality to our work and to our lives in what I call the Great Age of Mediation is a deliberate function of gradual subtraction and disintermediation.

JEFF: It always is. Dealing effectively with any addiction is difficult at best. But it can be done. People do it every day.

JAFFER: The Media Addict’s Handbook offers remedial tools and a program to help individuals restore the quality of their lives. Do you offer something equivalent for group events and businesses?

JEFF: Thanks for asking, Jaffer. Yes, I speak at events of all kinds, everything from fund raisers for faith-based organizations and civic groups to corporate seminars and workshops. Anyone interested can contact me directly at 718-598-3744.