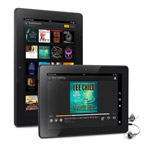 The most popular mobile/handheld devices for playing videogames in the U.S. are Android phones and Apple’s iPad tablets, but Amazon’s Kindle Fire tablets made a surprisingly strong showing in a June survey conducted by IDC. That survey’s results appear in the latest IDC-App Annie mobile gaming spotlight, out today. The overall winner was Apple, with more than 35 percent of 1,117 respondents naming iPhones, iPod Touches or (mostly) iPads as their favorite portable gaming devices. Android smartphones kept Google’s app store in second place, but on its own, the Kindle Fire — which is based on Android but uses Amazon’s own app store rather than Google Play — tallied about 12 percent of the votes. The survey additionally found that the audiences for Android smartphone and iPad games were “remarkably similar.”