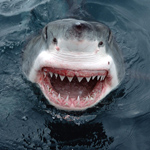 Western Australia’s beachgoers are a bit more informed as to the whereabouts of the region’s shark population this summer, thanks to a scientific initiative that has fitted transmitters to more than 300 sharks of various types. The transmitters are picked up by underwater receivers, and when a tagged shark comes within a kilometer of the shore, a tweet appears in the Surf Life Saving Western Australia twitter feed (@SLSWA). The tweet notes the type of shark, the receiver that picked up the shark, and the time and date the shark was detected. By glancing at the feed, Australians can get an idea of the amount of shark activity (if any) at their beach of choice and decide whether or not to brave the waters. Posting automated alerts via Twitter actually gets the information out to the public far more quickly than publishing hours- or days-old information in local newspapers or on the radio.