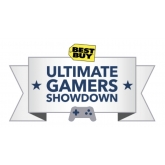 Best Buy is kicking off its Ultimate Gamers Showdown on Monday night in New York City and San Francisco. Marking the arrival of Sony’s PlayStation 4 and Microsoft’s Xbox One, Best Buy is letting gamers across the country compete and test their skill in Madden NFL 25, with the grand prize winner heading home with a $1,500 Best Buy gift card.

After beginning in New York and San Francsico, the competition will head to six other cities, including Boston and Los Angeles, over the course of the next two weeks. The tournament series will culminate with an event at the world famous AT&T Stadium in Dallas — home of the Dallas Cowboys — on Monday, Dec. 16, where the finals will be played on the world’s largest high-definition screen.

To enter the competition, make sure to show up early — and get your PlayStation 4 skills ready. Only the first 64 registrations in person on the day of the event will qualify to compete for a $1,000 gift card and a trip for two to Dallas to compete in the finals. During the events, customers can stop by to cheer on their friends, witness play-by-play commentary by professional shout casters, meet pro gamers and other special guests. They also can enter for a chance to win Best Buy gift cards plus additional prizes including the hottest new games and consoles.