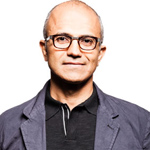 Microsoft Corp.’s board is preparing to make Satya Nadella, the company’s enterprise and cloud chief, chief executive officer and is discussing replacing Bill Gates as chairman, according to people briefed on the process. One person the board is considering to take the place of co-founder Gates as chairman is Microsoft’s lead independent director John Thompson, said the people, who asked not to be identified because the process is private. Gates may still play an active role at the Redmond, Washington-based company that he founded in 1975, depending on the wishes of the board and new CEO, said the people. Nadella emerged as one of the stronger candidates to replace departing CEO Steve Ballmer weeks ago, people familiar with the search have said. The plans aren’t finished, said the people.

PreviousReport: Amazon May Raise the Price of Prime to $119 NextThe Best Reading Comprehension Apps for Students