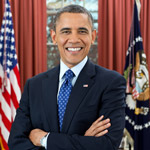 President Obama will once again use Google Hangouts to speak to Americans, this time after his State of the Union address next Tuesday. On Friday, January 31st, the president will use Hangouts on Air to chat with three different citizens from the West, Midwest, Northeast, and South, who will be able to ask questions about the address as it pertains to their part of the country. The event will be another chance for President Obama to use Google’s tools to talk to citizens in an environment that the White House can more directly control. Google also benefits from Obama’s apparent love affair with Hangouts — this time the president will using (and thereby touting) several of Hangout’s new features. This “Hangout Road Trip” is slightly different than previous presidential sessions, in which all of the questions the president answered were submitted before the actual live event.