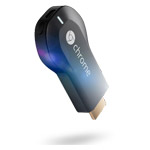 Countless apps could become Chromecast-compatible any day now: Google officially released the Google Cast SDK Wednesday, which allows developers to add Chromecast integration to their Android, iOS and web apps. Chromecast PM director Rishi Chandra said during an interview earlier this week that he could eventually see millions of websites and mobile apps add support for Google Cast: “Our opportunity set is fairly large.” Google released its Chromecast streaming stick nine months ago, but initially limited support to just a handful of apps, including Netflix, YouTube and the company’s own Chrome web browser. In the following months, a small number of hand-selected apps was allowed on the platform, including Pandora, HBO Go and Hulu Plus. Developers of other services were able to access a preview SDK and experiment with Chromecast support, but Google didn’t make it possible for them to actually publish their apps to end users.