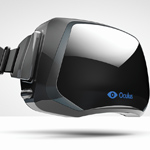 First, I’m flying by a space station. Then, I’m in a Middle Eastern war zone, watching troops respond to a local crisis. Finally, I’m back at E3 2013, braving the sweaty, nerdy crowds. Simply shot and without much story behind them, these filmed vignettes would normally make for ho-hum entertainment. But I recently had the chance to experience them all in virtual reality, running on an Oculus Rift prototype, and I confess — I was there. When the space station passed over my ahead, I turned around to look at it. When a gun fired in the distance in the Middle Eastern scene, I turned my head in the direction of the sound. And, after failing to spot myself in the E3 video (the camera didn’t come by the Starbucks line), I winced ever so slightly as passers-by stopped and looked at me.