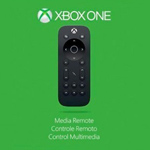 Microsoft is making its Xbox One Media Remote official on Thursday. After details emerged briefly on Amazon last week, Thursday’s announcement confirms the Media Remote will be available in early March for Xbox One owners. The Media Remote will allow Xbox One users to navigate, launch, and control media apps, and it will also control TV or AV receiver volume by using the Kinect as an infrared blaster. Microsoft has built motion-activated backlit buttons into the remote so they illuminate as soon as you pick it up. There’s also a dedicated OneGuide button for the built-in Xbox One TV feature, and channel up and down buttons to control content easily. While Microsoft continues to address early issues with its Kinect voice system for the Xbox One, this Media Remote could help ease some of those frustrations for Xbox One owners who wish to use their console for entertainment and TV.