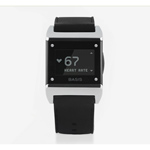 Intel has won the Basis auction, we’re hearing, at a price of around $100 million, according to one source. A second source pegs the deal at closer to $150 million. Basis makes wristwatch health trackers, capturing 7 percent of the market versus competitor Jawbone’s 21 percent. As Intel was all about the wearables this year at CES, we’re assuming that this buy is an attempt to further its foothold (wristhold?) in the space. Intel made a lot of noise with its own reference designs at the conference, including a Siri-like Bluetooth headset named Jarvis and a smart chip it dubbed Edison, which has myriad applied uses, including smart baby clothing and even smart mugs. Intel likely doesn’t have aspirations to compete in the consumer electronic marketplace; the company wants to sell chipset platforms.