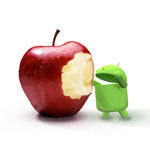 Android has mostly caught up to iOS in terms of the number and quality of apps available, and it might have eclipsed it in another regard: App stability. According to Crittercism’s Mobile Experience Benchmark report, apps are about twice as likely to crash on iOS as they are on Android. Not surprisingly, the study shows that newer versions of Android and iOS offer more stability than older ones. KitKat, Jelly Bean and Ice Cream Sandwich, for instance, showed a 0.7-percent app crash rate, while apps crashed 1.7 percent on the older Gingerbread OS. The same is true for iOS. The latest iOS 7.1 has a 1.6-percent app crash rate, while apps on iOS 7 crash 2.1 percent of the time. iOS 6 is even higher at 2.5 percent. As someone who primarily uses an iPhone but tests plenty of Android devices, I find this somewhat surprising.