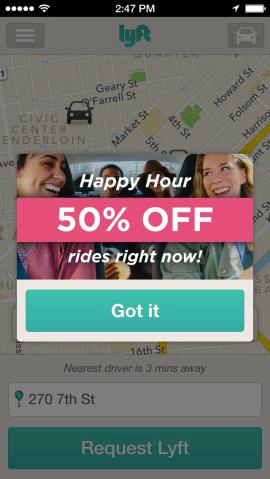 Lyft has launched “Happy Hour” rates — fares that are 10 percent to 50 percent cheaper than normal during slow business hours — to encourage more rides during those periods, the company announced Tuesday. Slow times are typically midday and after rush hour during the work week. “With Happy Hour, Lyft’s prices are fully dynamic, which is the way it should be,” the company said in a post on its Web site. This sounds like a bit of a dig at its competitor Uber, whose dynamic pricing model has resulted in some unhappy customers. First introduced by Uber, and more commonly known as surge pricing, the rate model increases fares based on how many cars are on the road and how busy they are. Though Lyft markets itself as a less expensive ride, it launched its own version of surge pricing for peak hours, called Prime Time Tips, at the end of last year.

PreviousGoogle Announces 'Android Wear': Its Plan for a Wearable OS NextThe NSA Can Record 100 Percent of an Unnamed Country's Calls