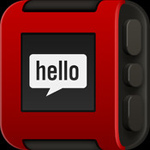 If Pebble is the smartwatch category’s David, surely Google is its Goliath. This week, Google announced Android Wear, a version of its popular mobile operating system, with launch partners such as Motorola and its Moto 360 watch, due in the summer. When devices like the Moto 360 arrive, they’ll join the massive Android community, one Gartner estimates will have 1 billion users by year’s end. “When we started working on wearables six years ago, there were few players in the space and a lot of skeptics,” says Pebble CEO Eric Migicovsky  of Google’s news. “It’s exciting to see this market grow so quickly — enabling more interesting use cases and keeping all of us laser-focused on creating the very best user experiences we can.” If Migicovsky doesn’t seem nervous, it’s because his startup is off to a solid start. The company has sold over 400,000 Pebble smart watches since January 2013.