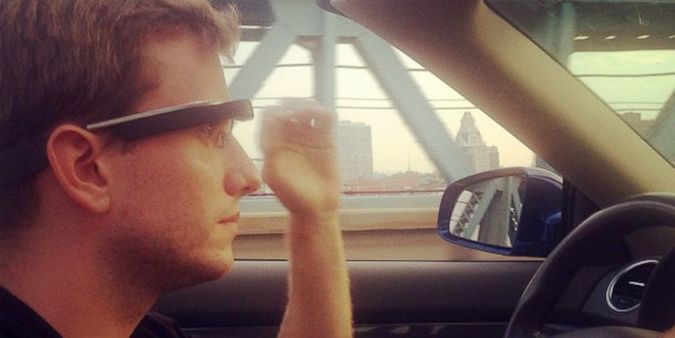 Should driving with Google Glass be allowed? There’s no precedent; technology is almost always ahead of strategy, tactics and the law.

Is technology good or bad? If we look at case law, such as Sony Corporation of America v. Universal City Studios, Inc., 464 U.S. 417 (1984) or, more recently, MGM Studios, Inc. v. Grokster, Ltd., 545 U.S. 913 (2005), the courts have consistently decided that technology is neither intrinsically good nor bad. However, the courts expressed the opinion that people must be responsible and held accountable for how it is used. The problem is that technology is almost always ahead of strategy, tactics and the law.

In my book Television Disrupted: The Transition from Network to Networked TV, 2nd Edition (York House Press, 2008), I looked for lessons from the Civil War:

“Often described as the first modern war, the Civil War was also the bloodiest in our country’s history. More men died in the first major battle, Shiloh, than had died in all other American wars up to April 1862. And, quite sadly, more Americans died in this war than the total of American casualties in all other wars combined.

A technological transition is universally cited as the cause of the 620,000 casualties and 50,000 amputee survivors. These grim statistics speak directly to the disconnect between technology, strategy and tactics. During this technological transition, Armies and Navies were using tactics developed at a time when you needed to see your enemy to kill them. Unfortunately, the generals of the day did not fully understand the power and accuracy of the modern weapons they were using.

The Model 1861 Springfield Musket was one of the shoulder arms of choice for the Civil War foot soldier. It had a rifled bore, interchangeable parts, percussion cap ignition and it was extremely accurate and dependable. Weighing just 9.25 lbs, this 58.5 inch workhorse came with a particularly nasty, triangular 21 inch socket bayonet. The unique attribute of this most lethal weapon was the .58 calibre conical minie ball that it fired at a remarkable 950 feet per second.

This weapon was deadly accurate at 800 yards and passably accurate at 1,000 yards. Put in human terms, a marksman of average 1860s skill could kill or maim a man standing half a mile away. However, that’s not where the projectile stopped, so you could be standing up to a mile away from the battleground and still get critically injured. Add the lack of medical and surgical knowledge to this situation and you’ve got a recipe for disaster—which is exactly what happened.”

Fast-forward to today and we have a new deadly technology: Distracted driving.

Trying to Crack Down

Everyone knows that texting while driving is a bad idea, illegal and very, very dangerous. But many of us still do it. New York has tried to cut down on its residents’ texting while driving—the state has issued taller, unmarked SUVs to undercover cops to catch texters in the act, and has also created “texting zones” where you can pull over and get in touch with family and friends.

These measures still don’t seem like enough. A court in New Jersey recently made news when it decided that drivers alone aren’t responsible—if you send a text message to another person you know is behind the wheel, you can be held liable in the event of an accident.

This stemmed from a civil case where a teenage driver who was texting while driving severely injured motorcyclists David and Linda Kubert. The couple had reached a settlement with the driver, but also wanted to charge the girl he was texting with negligence. The court said that remote texters have only a “limited duty,” and it will be hard to prove someone knowingly texted a driver. However, many think this is a step in the right direction.

A Need for New Legislation

Cops are trying to apply existing laws to new situations, which may not be the best way to approach the problem. A driver in San Diego County was recently cited for driving while wearing Google Glass. After the police officer pulled the car over on suspicion of speeding, the officer saw the driver was wearing Google Glass and promptly ticketed her. Police said the ticket was issued as a violation of California Vehicle Code 27602, which makes it illegal to “drive a motor vehicle if a television receiver, a video monitor, or a television or video screen, or any other means of visually displaying a television broadcast or video signal that produces entertainment or business applications is operating and is located in the motor vehicle at a point forward of the back of the driver’s seat, or is operating and the monitor, screen, or display is visible to the driver while driving the motor vehicle.” 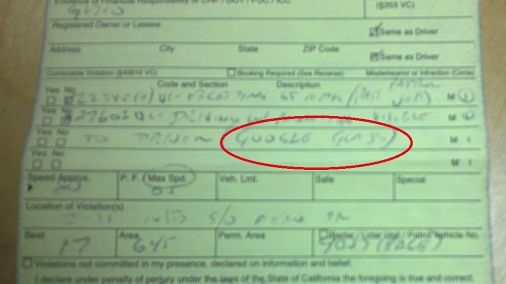 This was the citation handed out for driving while wearing Google Glass.

It was the first time that using Google Glass had led to a ticket, and it caught the driver off guard. She quickly took to the Internet and posted a note: “A cop just stopped me and gave me a ticket for wearing Google Glass while driving! … Is Google Glass illegal while driving or is this cop wrong??? Any legal advice is appreciated.” The charge against the driver was ultimately dismissed because the cop could not prove that the device was being used at the time the summons was issued.

With the pace of technological advancements accelerating at an exponential rate, we can look forward to a constant battle between what we are capable of doing and what is safe (and legal) to do. How will our legal system evolve to adapt to the rate of technological change? Txt me your ideas … just not while I’m driving!