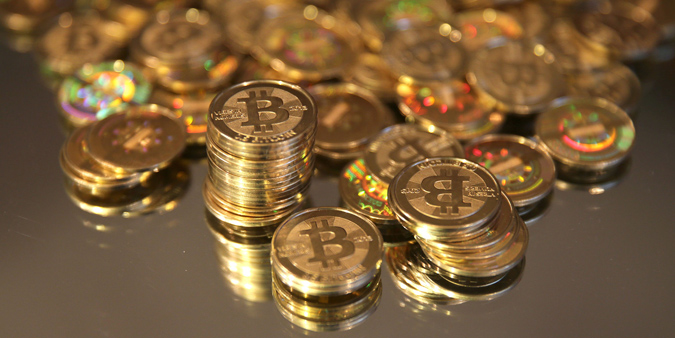 Here are 10 reasons why a US dollar is worth the paper it’s printed on:

There are 18 additional reasons, 14 of which are Ohio-class Trident II SSBN (ship, submersible, ballistic, nuclear) submarines each capable of carrying 24 SLBMs (submarine-launched ballistic missiles) on active duty on any given day. The other four are converted Trident 1 subs that each carry 154 Tomahawk missiles.

According to Wikipedia, a reserve currency (or anchor currency) is a currency that is held in significant quantities by governments and institutions as part of their foreign exchange reserves and that is commonly used in international transactions. The US dollar is the world’s reserve currency.

To be fair, there are many component parts that combine to give a US dollar value. Trust, our legal system and property rights (real and intellectual) are hugely important, and, of course, that list of military hardware helps quite a bit.

What Bitcoin is All About

At first glance, Bitcoins are different from US dollars. People argue that Bitcoin is a virtual currency with no government, land or physical goods to back it up. And, therefore, Bitcoins are somehow less valuable than dollars.

While I agree that Bitcoins are different from US dollars, I disagree with the argument that Bitcoins are less valuable than dollars. Bitcoins are a commodity, just like gold or copper or coal. You mine Bitcoins. And just like a natural resource, there is a finite quantity. In the cases of gold, copper and coal, there are estimates in the millions, billions or even trillions of tons. For Bitcoin, there will only ever be approximately 21 million. They will become harder and harder to mine and, according to the Bitcoin FAQ, “The last block that will generate coins will be block #6,929,999 which should be generated at or near the year 2140. The total number of coins in circulation will then remain static at 20,999,999.9769 BTC.”

Bitcoins are not virtual; they are a commodity that can be traded. And so they have been—until a few days ago.

By early February 2014, Mt. Gox was already having problems. US regulators had seized more than $5 million of the company’s money, and customers were reporting month-long delays in getting their US dollars out of the exchange. Then, “a technical glitch” prevented the exchange from paying out in Bitcoins too, effectively locking away customer assets until further notice. Mt. Gox suspended Bitcoin payouts to fix a bug in its trading platform.

Bitcoin owners were initially worried by this news, but then felt it really was just a technical issue, not a lack of available Bitcoins. The price fell $100—to below $700—on the morning of February 7, 2014, but was already starting to pick up again by the afternoon.

A week later, Wired reported that Mt. Gox had become the cheapest place in the world to buy Bitcoins, because some investors feared it would go bankrupt. This led to huge numbers of people rapidly selling off their Bitcoins, figuring it would be easier to retrieve their money in the form of US dollars (the world’s reserve currency) should something happen to Gox. Because of this uptick, it became very easy to buy Bitcoins at “bargain basement” prices at Gox, if you were bold enough to do so. (This is the inverse of what it had been, as Bitcoins were usually 8 to 10 percent more expensive at Mt. Gox than they were on other exchanges.)

Gox was reputed to keep most of its Bitcoins in cold wallets (these are hard drives that are offline and theoretically unavailable to hackers). With only a small number of Bitcoins online, Mt. Gox admins should have been able to quickly notice any anomalies in the flow of transactions. But something was terribly wrong.

On Monday, February 24, it all collapsed. Mt. Gox went offline, having lost hundreds of millions of dollars as a result of a years-long hacking effort that supposedly no one at the company knew about. The exchange became insolvent after losing 744,408 Bitcoins (~$350 million US dollars)—the largest Bitcoin heist ever.

The Future of Bitcoin

Should Bitcoins be government regulated? According to the Wall Street Journal, Federal Reserve Chairwoman Janet Yellen said the central bank doesn’t have the authority to regulate Bitcoin. “The Federal Reserve simply does not have authority to supervise or regulate Bitcoin in any way,” Ms. Yellen said Thursday in testimony before the Senate Banking Committee. “This is a payment innovation that is taking place entirely outside the banking industry.”

If Bitcoins survive, and I think they will, this episode will be looked at as a valuable learning experience. Transferring a Bitcoin from one account to another is practically identical to transferring a US dollar from one account to another. Computers do all the work and absolutely no paper money, gold or other physical goods are moved, shipped or otherwise involved.

What is different is that Bitcoin is backed by the full faith and credit of Mt. Gox (may it RIP) and the other surviving exchanges. They are virtual in every sense of the word.

US dollars, on the other hand, are backed by the full faith and credit of the United States of America, and while they may trade in a virtual environment, there is nothing virtual about them at all.