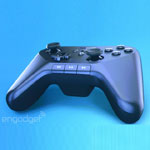 We all expected this, right? Yes, Amazon has a game controller, and it works with the company’s newly announced Fire TV. Sure, you could use the set-top box’s remote or an upcoming custom app to play games, but there’s a dedicated controller too that’s ready to wrangle a Fire TV-specifc version of Minecraft, NBA 2K14, Sev Zero (an Amazon Game Studios third-person shooter), and titles from big name developers like 2K, Ubisoft and Take-Two. “The controller is comfortable, it’s familiar,” noted Amazon Games’ Mick Frazzini. As you might expect, this means that there’s a button, dual-thumbstick and d-pad layout similar to the Xbox’s option. With Amazon’s offering, there are skip and play/pause buttons along the bottom edge with navigation controls placed front and center.