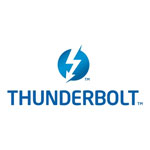 If standard gigabit Ethernet isn’t cutting it for you, Intel will soon give you another option: this week at the National Association of Broadcasters (NAB) show in Las Vegas, the company announced a new feature called “Thunderbolt Networking” that will soon be available to all PCs with Thunderbolt 2 controllers. The feature, which will be enabled by an upcoming Windows driver update, will “emulat[e] an Ethernet connection environment” and provide a 10Gbps two-way link between two computers connected with a Thunderbolt cable. Since you’ll need to connect the two computers directly to each other, this solution obviously won’t scale as well as real 10Gbps networking equipment. But for now, that hardware remains relatively uncommon and expensive—well outside the price range of individuals and smaller businesses. Thunderbolt Networking is apparently not being enabled for older computers with first-generation Thunderbolt controllers.

PreviousGogo to Bring 70Mbps Internet to International Flights in 2015 NextNew Smartphone Software Recognizes Your Activity, Locks Others Out