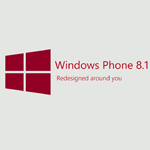 At its Build 2014 conference on Wednesday, Microsoft unveiled Windows Phone 8.1. Among the new features is a personal digital assistant named Cortana, a new Action Center, as well as support for customizable lockscreens and backgrounds. Cortana, Microsoft’s answer to Google Now and Apple’s Siri, completely replaces the search function on Windows Phone, which makes sense since she is powered by Bing. Launching her takes you straight to a list of personal suggestions based on how you use your device. Cortana, which is launching as a beta, features a Notebook, which is essentially the settings page for choosing what exactly the personal assistant should keep track of. If you’ve ever used Google Now, it’s very similar to the “magic wand” page. Among the options is a quiet hours option to make sure she won’t bother you.