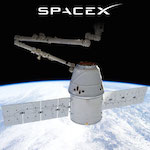 Elon Musk just announced a significant milestone for SpaceX and, well, humanity. The first live test of a Falcon 9 rocket boost stage landing vertically was a success. The first stage of the rocket returned to Earth and landed vertically in the Atlantic Ocean after boosting the second stage to a resupply mission with the International Space Station. Sadly, this part of the rocket was lost to sea as SpaceX could not retrieve the rocket until two days after it “landed.” Musk stated at a press conference today that all telemetry data indicates that the rocket soft-landed in the water with the legs deployed — as if it were landing on land. The end goal is to have a reusable rocket, one that can launch, land, and launch again. Musk says SpaceX foresees being able to land and relaunch a rocket on the same day.