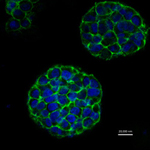 For the first time ever, scientists have 3D printed a cancer tumor in order to study how to kill it. Growing cancer cells in a laboratory is nothing new—it’s often how new drugs are tested before they hit clinical trials. But those cultures are grown on petri dishes, where they’re unable to become actual “tumors” and are instead simply sheets of 2D cells. That means that a drug might work on cancer cells in a lab, but once it’s tested on an actual tumor, the three dimensional structure of it can throw in some added kinks that makes it ineffective. Wei Sun of Drexel University saw that the 3D printing of living cells has improved enough to make printing of actual tumors a viable possibility. In a paper published in the Institute of Physics’ journal Biofabrication, Sun describes the advantages of creating actual tumors (that simulate cervical cancer) over testing drugs on single 2D-layers of cells.

Read the full story at Vice.