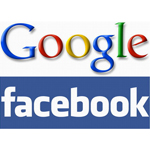 Not happy with just offering fiber-optic internet access in select cities, Google — and Facebook to a lesser extent — are investigating satellites as a way to deliver internet access according to The Information’s sources close to the situation who would not speak for the record. Among the evidence the article cites for this conclusion is Google’s recent hiring of Brian Holtz and Dave Bettinger. Both came from companies (O3b and VT iDirect respectively) that specialize in communication satellites. Google has also invested in O3b and a current Google employee sits on company’s board. A Boeing representative told The Information that Facebook and Google are “beginning to show a broader interest in satellite technology.” While both companies are looking to space to broaden their reach, the ad-supported Google has the potential resources (cash) and gumption to actually follow through in the immediate future.

Read the full story at The Next Web, and the original report at The Information (paywall).