Built around the Amazon Prime experience, the Fire Phone runs the same heavily tweaked version of Android found on the Kindle Fire. That means it’ll have access to the 240,000+ apps in the Amazon Appstore, but not every app in the Google Play store (which is roughly five times as big as Amazon’s Appstore). What’s missing? Most notably Snapchat and YouTube.

Firefly and the Amazon Experience

The phone is a market leader in one category: helping you buy stuff from Amazon. That’s thanks to the phone’s “Firefly” feature, which is “basically an everything-scanner.” Once you open up the Firefly app (via a dedicated button on the side of the phone), you can point your phone at just about any item – a DVD, a bottle of water or any number of 70 million other products – and the Fire Phone will display it on Amazon. Firefly can also scan text like phone numbers, restaurant signs and QR codes, then identify that text to make calls, create contacts, send emails, go to websites and more. 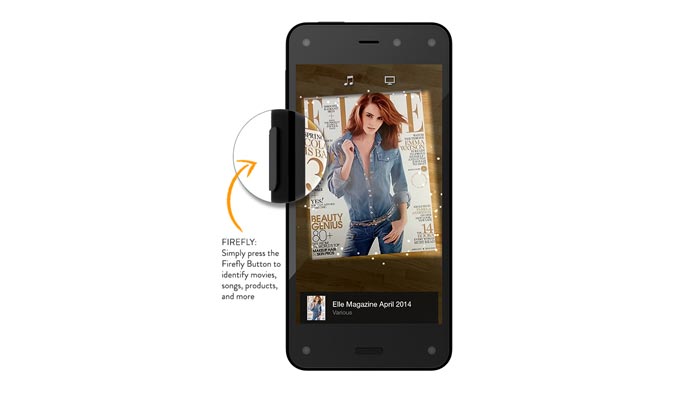 Firefly also recognizes a quarter of a million movies and TV shows and 160 live TV channels. It taps into Amazon’s X-Ray feature to show you relevant info about what you’re watching, like the cast and plot. Like Shazam, Firefly can recognize songs, then let you download those songs or add them to a Wish List. Unlike Shazam, you can then use that information to buy concert tickets on StubHub or create an iHeartRadio station around that song.

Inside, the phone has a 2.2GHz Qualcomm Snapdragon 800 processor, 2 GB of RAM, a battery that Amazon says should last “all day” and a 13 MP camera (that can also shoot 1080p video).

The standout hardware feature is the phone’s four cameras positioned at the four corners of the phone’s 4.7-inch screen. These cameras create “Dynamic Perspective,” a custom-designed sensor system that responds to the way you hold and look at your phone.

What’s that mean? If you’re buying a Yankees ticket on Stubhub, you can look 90 degrees to the left and right of your seat like you’re in the stadium. It also means that the phone can access hidden panels or perform shortcuts based on the way you tilt your phone. The feature also helps you read books or long web pages without ever touching the screen.

Amazon’s 24/7 tech support feature, “Mayday,” is also included in the Fire Phone. First included in the most recent wave of Kindle Fire tablets, Mayday offers free, live, on-device tech support where Amazon’s experts will guide you through any issues you’re having on your device. Amazon also says you can get Mayday help in 15 seconds or less, with no waiting in line and no appointments required.

Amazon’s also offering some nice free perks with the device. The big add-in is a free year of Amazon Prime (normally $99) with every phone purchase. If you’re a Prime customer already, Amazon will tack on 12 months to your subscription. Amazon’s also including 1,000 Amazon Coins (a $10 value) for apps, games and in-app purchases with the phone. Finally, for photo fanatics, Amazon is offering free unlimited Cloud Drive storage for pictures you take with the Fire Phone.

The Fire Phone will be an AT&T exclusive (at least to start), and is now available for pre-order (to launch on July 25). It’ll run you $200 for the 32GB version and $300 for the 64GB model along with the standard two-year contract. 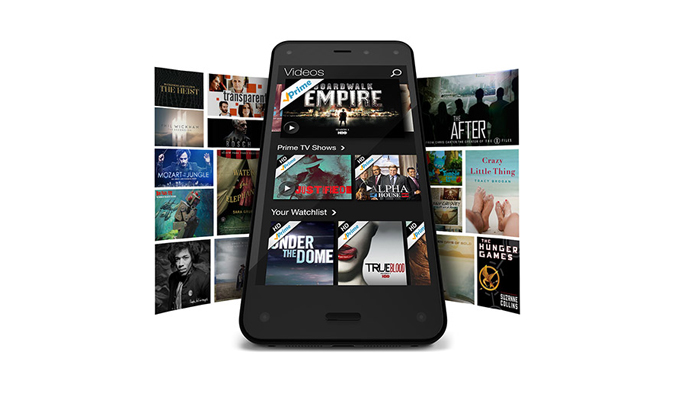 Should You Buy One?

If you live in the Amazon ecosystem – if you’re a Prime customer, addicted to Amazon Instant Video, newly-launched Amazon Prime Music and the Kindle Owners Lending Library – this phone was made for you. It’s the best parts of Amazon condensed into a device small enough to fit into your pocket.

For everyone else, the phone is good, but not a must-own device. While the hardware is acceptable, the app offerings will leave sophisticated users wanting. The phone also doesn’t have Bluetooth LE, which is bad news for wearables. It was also rumored that Amazon might offer the phone for free or underwrite service costs, but neither of those happened, which is a big relief to other Android manufacturers. More importantly, the Firefly technology will undoubtedly end up as an app, or be given away free to other manufacturers, when Amazon realizes that it cannot sell enough phones by itself.

While I’m hugely impressed with the nascent image recognition software and I am sure it is the beginning of a new era in mobile assisted living, for all but the biggest Amazon junkies, it may be early to jump into the Fire.