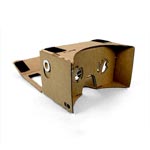 Amidst Google’s numerous announcements at its I/O developer conference, it was Google’s low-budget but practical take on virtual reality that was perhaps the most notable device, for me at least. Facebook may have dropped $2 billion to buy VR device maker Oculus, but, for Google, using cardboard and an Android device is enough. That comparison isn’t strictly fair, since Oculus does a lot more than make its Oculus VR product, but — in end user terms — Android Cardboard offers the same opportunity to experience virtual reality, albeit on a budget-driven and simple level. “We want everyone to experience virtual reality in a simple, fun, and inexpensive way. That’s the goal of the Cardboard project,” Google says on the Cardboard website, which includes instructions on how to make the product. (Those who can’t find the components or just can’t be bothered can pay $19.95 for an unofficial pre-prepared kit.)