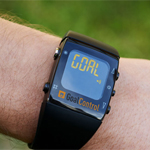 At Thursday’s opening match between Brazil and Croatia, the referees will be wearing smartwatches that read “GOAL” and vibrate when a team scores. No, it’s not punishment for the infamous Frank Lampard disallowed goal of 2010. It’s part of a new “unhackable” goal line detection system, the first to ever be used in the World Cup. According to FIFA, this closed-loop system includes seven incredibly high-speed cameras—that snap 500 shots per second—positioned around both goals, at each of Brazil’s 12 World Cup stadiums. These cameras can measure the position of the ball every two milliseconds according to the GoalControl, the German company that makes it. “When the ball passes the goal line, all referees receive in less than 1 second a vibration- and optical signal at their watches,” the company explains.