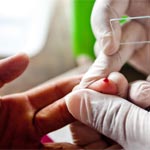 Scientists have developed a new blood test that can predict who will develop Alzheimer’s disease a year after having mild memory problems—and it could be in clinical use within two years. Researchers from King’s College London have developed a test which identifies 10 proteins in blood that can predict who will develop Alzheimer’s. It’s around 90 percent accurate, and is set to enter large-scale clinical trials soon. The research is published in Alzheimer’s & Dementia. There have been other blood tests for Alzheimer’s in the past, but despite their promise, they were difficult to translate into medical practice because they identified lipids. This new test, however, relies on the presence of proteins in the blood—making for much easier, lower cost testing.