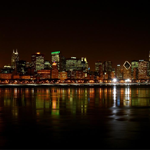 With the threat of terrorism and extreme weather perennially perched on the horizon, Chicago’s getting creative with its infrastructure upgrades. The city’s primary power company, Commercial Edison, is planning to install superconducting cables to prevent outages in the city center. Why doesn’t every city do this? The job sounds pretty simple. ComEd will lay superconducting cable alongside the existing copper cable underground. Both are about the same size, but the superconducting cable can carry about ten times as much power as the regular cable. This makes it comparable to the cables that come directly out of power stations, and means that the grid can reroute power in the event of a catastrophe to prevent a service interruption. At first, the superconducting cables will only serve the Loop area of downtown Chicago.