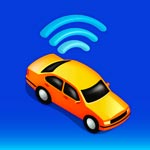 How would you feel being a walking advertisement? If you’re wearing a T-shirt with a company’s logo on it, that’s one thing. But your phone — in your pocket? That’s quite another, and it’s just what taxi hailing company Taxi Magic is doing with its iOS app. A new version being released this Thursday will let you beam out your referral code for the service to others, all using Apple’s iBeacon technology. These notifications won’t pop up for everyone though, just other Taxi Magic users who have downloaded the app and have it open, but have never ordered up a ride. They don’t have to type anything in, and you get a $10 credit if end up calling a cab. Taxi Magic is hoping the feature will reward existing users by getting them credit they can use on future rides, while encouraging new users to pull the trigger on their first.