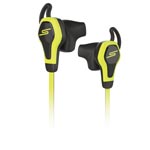 Headphones don’t care if you’re listening to terrible music while exercising, but a new pair from 50 Cent’s SMS Audio might judge your workout. The company’s just announced BioSport In-Ear, a set of wired earbuds with biometric capabilities to record heart rate using built-in optical sensors. The earbuds draw power from the headphone jack and promise to stay in ears during activity with a “hook” shape, as well as keep sweat and water out with an IPX4 liquid rating. This particular pair is using technology from Intel. The chipmaker showed off a reference design of the sensors at the Consumer Electronics Show back in January, with the hope that companies would add the technology to their own products, and developers would integrate the data into apps. So far that list only includes RunKeeper, which the two companies say will record heart rate, pace, distance, elevation, and how many calories you’ve burned.