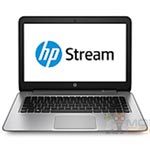 Microsoft announced that it would be working with its partners to release ultra-low-cost Windows laptops just over a month ago, and now thanks to a leak from MobileGeeks, it looks like HP will release one of the first of these ultra-low-cost computers. The HP Stream 14 is a 14-inch, Windows 8.1 computer that is expected to sell for a paltry $199. The Stream 14 has an AMD processor, 1366 x 768 pixel display, 2GB of RAM, 32 or 64GB of internal storage, and a slot for an SD card. If you ignore the Windows stickers that are surely going to be located on the palm rests of the Stream 14, you’d be hard-pressed to tell it apart from HP’s Chromebook 14, a popular 14-inch Chromebook released late last year. In addition, the documents obtained by MobileGeeks claim that Microsoft will be throwing in 100GB of OneDrive storage for two years with the purchase of the Stream 14.